What do you mean when you say “I can’t”?  Do you really mean I won’t or I don’t want to?  Think about it for a second, what do you mean?  Most often when we say “I can’t” it is not REALLY because we actually can’t do the thing.We may not want to put in the time to learn the necessary skills to do it.  We may not want to invest the resources to do it.  We maybe don’t want to trade something else for it.  Most things we can do or we can find a way to do them even if not the blatantly obvious way of doing them.  Most of us run into the bigger issue of giving up or not wanting something enough.  We throw in the towel often before the fight has even started.  We look at a thing that we don’t know how to do, don’t comprehend, and don’t have experience in and immediately think or say “I can’t”. 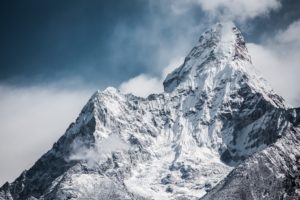 Everything looks like Mount Everest when you are standing at the bottom looking up.  Well, Mount Everest has been successfully summited 9,159 times.  I am of the belief that we have the ability to do anything.  The issue then is in having the proper desire and determination to see it through. If you believed to your core that you could not fail and you were capable of accomplishing anything with enough effort and persistence what would you do?  How much would you accomplish?  What things would you go after and which things would you stop doing?This can be your reality, but you have to transcend your current level of thinking.  Once you do the world is your oyster.  The internal conversation shifts to…“Yes I can, but do I want to and if not then what do I want?”