Sit Back and Watch the World Go By

I am generally an action-oriented person and encourage others to be so as well.  Our greatest strengths are often our most significant weaknesses.  Being too action-oriented at times looks more like mania and sometimes turns into a manic state where the actions become hurtful instead of helpful.  My younger son Lachlan, when faced with a challenge, although scared, will turn on his “fight” instinct and charge like a bull.  Whereas, my older son Drake, when faced with the same challenge, will turn on his flight instinct and run away to ponder.I am more often like Lachlan and do better to be more like Drake more of the time.  I am a “man of action,” but my actions are a hell of a lot more fruitful when I take time to think and analyze them.  Even if just a few breathes.  Psychology tells us that NOBODY makes great choices when under high levels of stress; it is merely that all of us handle different stressors differently.  For example, the astronauts of Apollo 11 had different heart rates during the launch because of how they individually dealt with stress.  Neil Armstrong – 110 BPMMichael Collins – 99 BPMBuzz Aldrin – 88 BPMAnother example of this is Free Solo climber Alex Honnold.  Alex is considered the world’s most excellent solo climber.  He climbed El Capitan without ropes!  If that doesn’t make you wet your pants from fear (Charlie H. you are probably right up there with Alex), you just are not typical, and that is precisely what they have determined about Alex’s brain.  His brain does not process fear like most people. Psychology has come up with a nifty little way to explain this called the Inverted-U Theory. 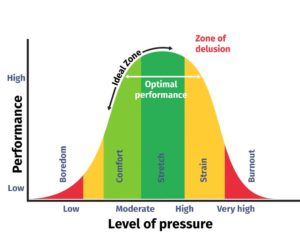 Michael Jordan didn’t make all those game-winning shots because he was excellent under pressure; he made them because he didn’t feel the pressure (and thousands of hours of practice so that it merely felt like any other shot).Alright, alright, alright, before I get into a full-blown psychology lesson, here is the point.  You will likely make better choices if you take a minute or two to meditate, ponder, and breathe when you are in the midst of chaos.  I like to see it as “sitting back and letting the world pass by.”   Many times things will work themselves out on their own without your interaction when you give them enough time.  There is a bit of chaos now, and although some action is needed, maybe for some of us, it is time we take a seat and let the world pass by for a bit.