Fight to the Death? 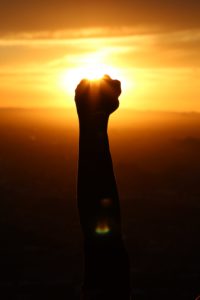 Photo by Richard Felix on Unsplash

In times of crisis, it helps to know what matters.  Knowing what matters enables you to make decisions faster and ruthlessly.  We are in a time of need for this type of decision making. What do you believe in so much that you would die defending it?Freedom?Respect?Capitalism?Family?Peace?What?  Get very clear on the things you believe in.  Know the things you would die to protect.  Then fight for those things.  Get pissed about those things.  Throw your passion behind and into defending those things. There are too many things to be angry about for you to do something meaningful and impactful for. Thus, you must focus.  Focus your energy and passion on the one to three things that you believe in so much you would die for.  Reserve all of your energy and resources for those few key things.  Waste no breath, nor wealth, nor health, nor emotions on anything else.  Everybody has something they would die for, but if you don’t, sit on the sidelines and allow the people who believe in a cause to battle it out instead of muddling the waters.  Most things will turn out this way anyway, as you cannot fight for everything that is wrong with the world.  However, for the one to three things that you believe in, well, you better fight for those things to death, or they may well die before you do.