Did Somebody Say Brownies? 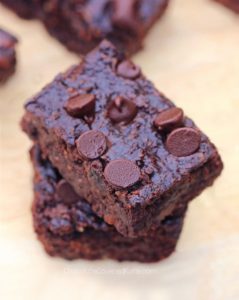 My wife makes BOMB black bean brownies.  They contain no animal products, making them fit for vegan eaters, are sweetened with coconut sugar (low on the glycemic index), and are loaded with healthy cocoa, protein, and fiber.  She often sneaks a vegetable of some sort in as well.  These brownies are one of the healthiest “desserts” you could have that still tastes like a dessert.  They are one of my favorite sweets.  I often eat them as a meal 🙂 So the other day she gave the recipe to a friend.  The friend made them and a member of their family ate them thinking they were standard good ol’ fashioned brownies (you know the version with NOTHING beneficial in them).  As the story was told to me apparently once the unknowing family member found out what they really were they would no longer eat them.  Which left me perplexed.  I was perplexed until I remember how we assign value to things based on our perceptions.  You see many people think that “vegan” foods (by the way there is no such thing, there is just food) are inferior or something they shouldn’t be eating as proud meat-eaters.  Another example is how your spouse may have given you advice on something one hundred times but you didn’t act on it until you heard it from somebody else.  We have a bad habit of assigning value to a thing NOT based on the actual thing but based on our perception of it.  You see the brownies in question, in my opinion, taste far better than the unhealthy version and on top of that, they don’t make you feel terrible after eating them, not to mention the nutritional benefits.​​The person eating the brownies didn’t know the difference and kept eating them until they found out what they were!  Instead of saying oh wow they taste good and they are good for me, they somehow associated a healthy food fit for vegan consumption as something they shouldn’t eat.Do you see how crazy we are?!​​Where in your life are you assigning value to a thing not because of its inherent value but because of your perception?  You may want to reevaluate your evaluation on a few things 😉Here’s the original brownie recipe my wife modifies :-)​